Lately I feel like I berate my kids. Could you please rinse your spoon?  How many times do I need to tell you to pick up your clothes?  Please, thank you, please, thank you, please?  Maybe I’m tired, stressed, sleep deprived; maybe I’m just irritable.  I don’t like it.  I’d rather guide them with more patience and love.  Like Toni Morrison said, “You think your affection and deep love is on display, because you’re caring for them.  It’s not.”  She asks, “Does you face light up” when you see your children?  In other words, can they see and feel your love for them when they see your face?

I first learned this word at a ropes course, maybe in high school. It’s a climbing term many of you will know.  Dictionary.com’s mountain climbing definition of belay is as follows:

I remember hearing, “On belay!” as part of the climbing sequence. A quick Google search of the phrase yields this explanation:  “Your belayer…lets you know that he is on belay and that it is safe for you to climb, saying, ‘On belay.’”  The voice commands before climbing commences are:

I want to be the belayer, the anchor—of character, behavior, confidence, and love—from which my children can cast themselves. They need to know that I am here to secure them, the stable place from which they can strive for new heights.  In order to do this, they need to know that I believe in them, that I see their essential worthiness.  I could say something more like, “Hey, I know you’re a good kid and you want to help out.  It really helps keep our home clean if you pick up your clothes from the floor.”  It’s much more mindful.

Recently the actor Tom Hiddleston appeared on The Late Show with Stephen Colbert, to promote his new movie, “I Saw the Light.”  Hiddleston, a Brit, plays Hank Williams, the iconic American folk singer.  I already love both Hiddleston and Colbert, so I could not wait to watch the video of them singing a duet on the show.  It turns out that Hiddleston had never sung before this role, but did all the singing himself in the film.  Colbert invites him to sing, live and impromptu, on the show, and what follows is a perfect study in belaying.  Allow me to dissect and interpret:

2:18   Stephen first invites Tom to sing.  Tom expresses apprehension.  The crowd goes wild and he looks conflicted, as if he mostly does not want to sing.  He tries to quiet the crowd but they are rowdy.

2:33   Stephen lightens the mood by playing spoons on the desk.  He makes it safe for Tom to consider the invitation, buys him some time to decide.

2:36   Tom says if we want to see him sing, we should see the film.  He looks almost deflated, like he feels at once dutiful to have plugged his movie, and disappointed that he might have passed up a chance to perform.

2:45     Stephen promptly finds a way to relate to Tom—says he grew up on Hank Williams.  He appeals to Tom’s admiration for the singer, makes a connection.  He suggests they sing “I Saw the Light,” the title track from the movie.  Tom still looks disinclined.

2:56   Stephen gets a riff from the band, and sings the first line of the song.  It’s pitch perfect, and completely authentic.  He puts himself out there first, an honest and vulnerable invitation for Tom to join in.  On belay!

3:03   Tom has been holding his breath, and lets it out in a reluctant puff, shaking his head.  You can still see his conflict, and you’re rooting for him.  Jump in, Stephen will hold you up!

3:10-5   Tom sings the second line with Stephen, slowly, and in perfect harmony.  He’s still sitting back, a little stiff, hands clasped in his lap, cautiously accepting the invitation.  Ready to climb!

3:29   The band starts playing in earnest and the audience immediately starts clapping enthusiastically.  At this point you just want to get up and dance, the energy palpably rising.  Climb on!

3:37   His shoulders relax, he gets animated.  He leans in further, starts to really have fun.  Climbing!

3:55   Tom’s really enjoying himself, he’s into it.  If you’re not moving your body by now, there might be something wrong with you.

4:15   He looks to Stephen, grateful and maybe a little relieved, and also very glad that he took this chance to sing and have fun. 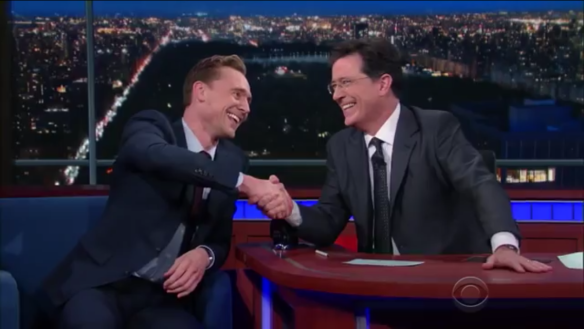 4:19  After shaking hands, Tom lightly hits the desk with his fist.  I bet he’s thinking, “Nailed it.”

The interview starts with the two men talking about Hank Williams’ troubled life, his ‘formidable demons,’ as Hiddleston puts it. He expresses compassion for this, as I have seen him do in previous interviews about other characters he has portrayed.  He describes how Williams rose to stardom quickly, but ‘with no real support, no one to anchor him.’  Funny how he uses that word, anchor—like belayer.

We all need our anchors, our belayers. They are the people in our lives to whom we secure ourselves, and who look out for us.  Thanks to them, we can climb on, toward new experiences.  From their stable posts, we can stretch out and grow.  And when one of us grows, we can all grow.  Or in the case of this video, we all at least have a great time!

We can belay one another in seemingly the smallest ways…or maybe they’re not so small after all.  I bet Tom will remember this duet his whole life.

16 thoughts on “#AtoZChallenge: On Belay!”