“You never really understand a person until you consider things from his point of view—until you climb into his skin and walk around in it.”

To Kill a Mockingbird, by Harper Lee

How do you practice and achieve empathy?  How do you notice others doing it?

It’s been on my mind a lot these last two weeks.  Current American politics resembles an interminable abscess, oozing ever more copious and putrid gobs of pus, from ever more unforeseen tracts of deep, diseased tissue.  How can we find any Healing Connection in the midst of all this?

Role Play for the Good

I used to hate role play, and now I jump at any chance to try it!  It all changed through a 7 week teaching workshop I did during my chief resident year, and I am forever grateful for the experience.  Now I regularly use role play to teach motivational interviewing, or MI, to medical students and residents.  Put simply, MI is a counseling technique that focuses on patient autonomy, and aims to reinforce intrinsic motivation for change.  My teaching method has evolved over time, due to my own unexpected experience of ‘climbing into the skin’ of others.

In the beginning I used to play the patient, letting students take turns practicing their MI skills on me.  After a couple of sessions I realized that even though I was pretending, I really felt like the students were earnestly trying to help me change my health habits, or making me feel bad about myself, depending on their proficiency.  So to give them the benefit of this perspective, I had them take turns playing both patient and physician.  The feedback revealed a richer, more insightful experience for all.

In 2015 I attended the Active Lives conference, where my technique was further enlightened.  I got to role play four times with a partner: first as patient, then physician, doing it the ‘wrong’ way (directive, authoritative, confrontational), and again in both roles doing it the ‘right’ way (collaborative, empathetic, nonjudgmental).  I felt the immediate contrast of the four roles emotionally and viscerally.  When all I heard from the doctor was, “Yes, I know you’re busy, but you have to find time to exercise,” and “Why don’t you do this…” and, “You should… You need to… If you don’t, then…” I felt absolutely no impetus to take any of this advice.  But questions like, “How important is it to you to…  How confident are you to… What would it take…what would need to happen in order for you to…” and, “What would life be like if…” invited me to explore possibilities, helped me to imagine and create my own future.  As an authoritative physician, I felt frustrated at my patient’s resistance to my evidence-based and well-intentioned advice.  By contrast, as a collaborative doctor, I feel freed to embark on an improvisational Yes, And adventure to reveal each patient’s personal path to healthier habits.  Now I offer my students the opportunity to experience all four roles.

I remembered this insight evolution last week when I came across a 1970 video of Jane Elliott’s classroom racism experiment.  She divides the class by eye color, asserts that blue-eyed children are better than brown-eyed children on one day, then reverses the premise the next.  While she makes privilege assignments that likely would not fly today, she also debriefs with the kids, helping them identify their assumptions, feelings, actions and reactions—much more authentically and directly than I think we are willing to do today.  She does it all without judging or shaming, pointing out biases and encouraging her students to examine them for themselves.  I admire her for pioneering this exercise, and I bet it affected her students in profound and lasting ways.

The Importance of Story

Clearly, we cannot possibly depend on such academic practices to develop everyday empathy.  Luckily we now have infinitely easier access to one another’s stories than ever before, which is the next best thing.   Lately I feel a keen new appreciation of the importance of storytelling for conveying experience and stimulating mutual understanding.  Obligingly, the universe (read Facebook) has provided me with numerous testimonies of my fellow humans’ experiences and conditions, and this week they touch me even more acutely.  Here are some of them: 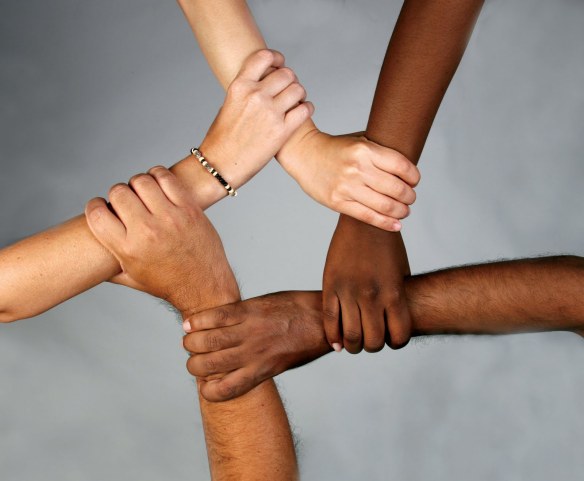 The overarching goal here is to intentionally thwart the abstraction and dehumanization of people who are different from ourselves.  Stepping into another person’s shoes, ‘climbing into (their) skin,’ imagining how they feel, and actually feeling it—this is the best protection against bias, prejudice, and discrimination.  Empathy forms the sticky webs of connection that stymie the hymenoptera of hatred mid-flight, or catch us in the face and remind us to look where we’re going.  Where do we want our thoughts, words, actions, and relationships to take us?

I imagine a world of colorfully flawed humans, who acknowledge our biases openly and honestly; who recognize the risks that those biases carry; who accept ourselves, warts on soles and souls and all; who commit to a lifetime of extending that acceptance to one another; and who understand that it is our relationships, all of them, that kill us or save us.

So let’s play and tell—and feel and listen.  Really,  it’ll be good for all of us.

2 thoughts on “Applying the Wisdom of Atticus Finch”