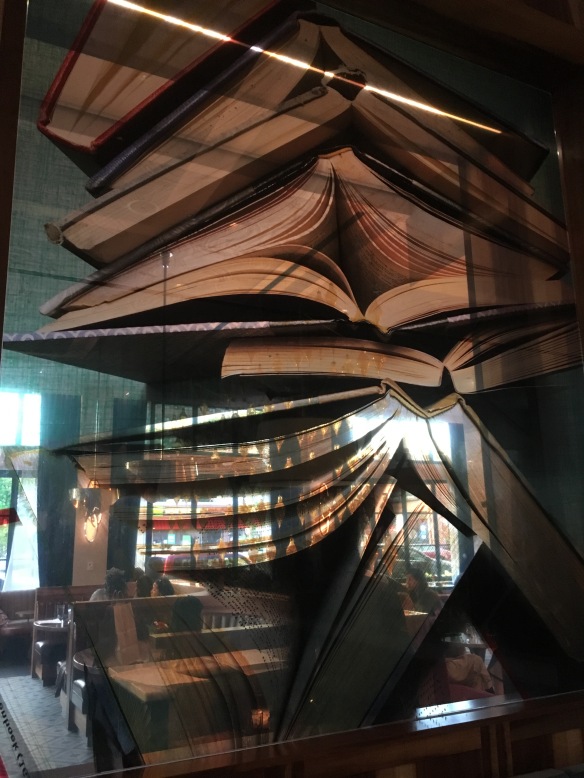 Today I share a Facebook comment series I wrote in response to a prompt from a progressive friend, in its original form.  His post made me look up and read 7 additional articles, all of which I linked in my comments.  In the end I became more aware of my own biases, and recommitted to finding common ground with people who think differently from me.  So I think reading makes me better.  What think you? 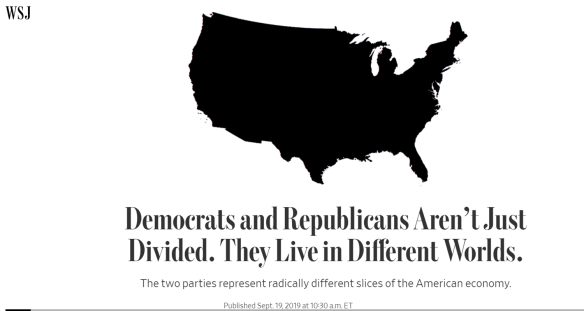 Friend’s post:  (Cathy):  I’d be interested in your perspective on this article in terms of your work to bridge divides and create civil conversations.   [Wall Street Journal slide deck describing the economic basis of party divisions in the US—it’s a fast click through which I recommend.]

Thanks for sharing, (Friend)! Okay, I will take the time to make a long comment thread, as this is really interesting to me. Thank you for asking the question you did–I’ll get to it eventually! First: The information presented in this slide show is consistent with what I have read before. The facts presented are real. And they are incomplete. It looks at differences between districts, which is the best way to highlight division. I think this is a direct consequence of gerrymandering, which is designed exactly to create districts that will reliably vote one way or another. And we have all seen the US map showing blue clustered around big cities and red everywhere else. AND, this report ignores the glaring truth that despite the economic divisions by district and income, a much larger proportion of the top 1% is either declared or leans Republican than Democrat (though not necessarily more conservative):  https://news.gallup.com/poll/151310/u.s.-republican-not-conservative.aspx

Second: The suburbs are where Reds/Blues live amongst one another, and this report ignores them, pretty much. That said, even without gerrymandering, we Americans have sorted ourselves ideologically. Bill Bishop wrote a fascinating book that details the economic and social evolution, _The Big Sort_ (listened to the whole book a year ago, I highly recommend it): http://www.thebigsort.com/home.php

I think suburbs are where work like Better Angels has the most potential to spark civil discourse, except that people are hesitant to engage, for fear of upsetting the tenuous and silent politeness that constrains their ability to talk openly about politics. That cultural noose is hard to untie. 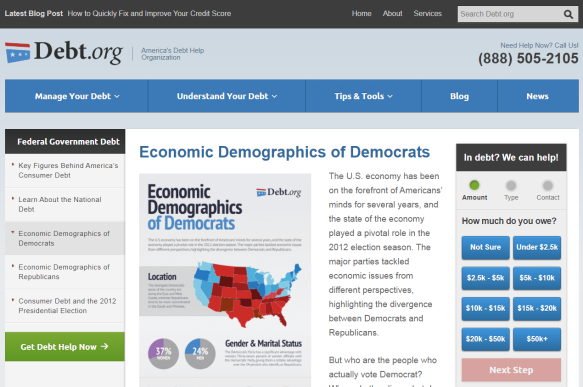 [Below are a] couple of other links that have additional demographic information that gives context and texture to the WSJ slide deck. The point of all of this is that when we I read articles that start out with nihilistic, Vader-like proclamations of “America’s political polarization is almost complete,” I see an implicit agenda to actively contribute to that polarization for the good of the publisher. Brené Brown reminds us to beware of those who tell us things are absolute, either/or. Reality is almost never this dichotomous, and whenever we hear it is, we should look for who benefits from us thinking it is. Economic demographics of Democrats: https://www.debt.org/…/economic-demographics-democrats/

Okay finally, to answer your question, on my “perspective on this article in terms of (my) work to bridge divides and create civil conversations”: My favorite visual is this table from the first article I linked to. In some ways we are ‘almost completely’ divided, as the Vader article posits. In other ways, we are not. I think of the surveys showing a majority of Americans being in favor of background checks for gun ownership, in agreement that abortion is generally not something we want happening all the time. I think of all of the conversations I have with pretty much any other human, and how we are all 90% more alike than different. But this article and 90% of the articles we see highlight the other 10% of differences, and worse, the most vehement and violent expressions of those differences. So my perspective on this article is that it contributes significantly, if not blatantly, to the division it reports. And it does not serve us in any way. And, I hope I would have the same response if it were published by the New York Times. 😉 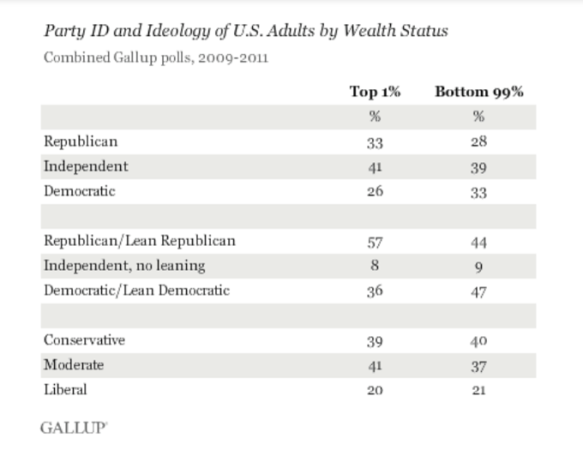 HANG ON. I just saw that this favorite article I cited is from 2011. I have found a couple of more recent ones; will review and continue the thread…. 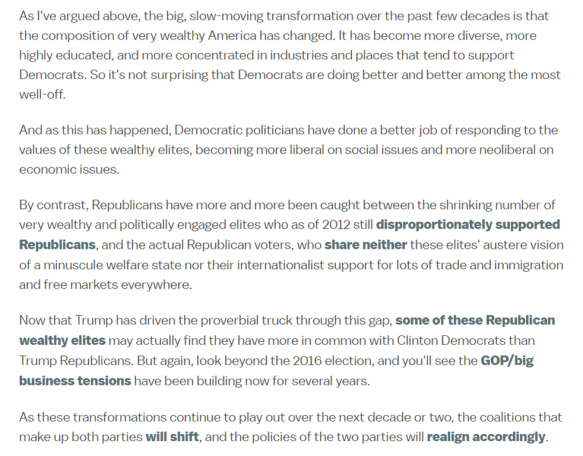 Okay, here is an article from 2016 by a poli-sci expert who, [Bill Bishop-style], explains well the progressive evolution of the top 4%. Very interesting:  https://www.vox.com/…/6/3/11843780/democrats-wealthy-party

And hey, here is one from Forbes this year, which quotes the author of the Vox article, highlighting how a sizable number of Republicans actually align ideologically with Democratic policies:

“The fact that lower-income Republicans, largely known as the ‘basket of deplorables,’ support more social spending and taxing the rich was a key takeaway from this year’s report, says Lee Drutman, senior fellow on the political reform program at New America, a Washington D.C.-based think tank… ‘It is pretty striking that about a fifth of Republicans had views closer to the median Democrat than their own party,’ he says. ‘A lot of them actually want a sizeable social welfare state. It’s a little bit of a puzzle why they don’t vote for the Democratic Party, other than long-standing cultural ties maybe and other ballot issues. What we have here is just one of the two parties stands out to have a bunch of its supporters in opposition to some of the party’s economic platforms but still gives them their vote.’” https://www.forbes.com/sites/kenrapoza/2019/06/24/how-democrats-and-republicans-differ-on-matters-of-wealth–equality/#13e06ab8702f

More from the Forbes article:

“Across party lines, Democrats were the ones who were most interested in a higher tax burden for the wealthy, though it is unclear if they considered themselves to be part of the income group that would be hit with higher taxation in a more progressive tax structure.

[In conclusion:]  Complexity does not make for headlines, sadly, and we should take this into account when we read and share. Thanks for posting on my page and asking the question, [Friend], you have made me think and thus made me better! 😀